A Mom Watches Real Housewives and Admits It 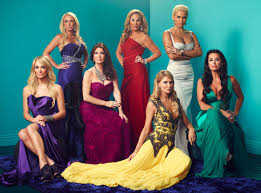 I am going to talk about a serious form of discrimination I have been experiencing.  I am a good person and don?t think I should be victim to this kind of treatment. It?s called real housewivist. This is when I tell people I watch the Real Housewives franchise and they look at me with those judging eyes, as if I am less then them.  As if my TV isn?t as good as their TV.

I am here to fight for my rights, and the rights of every other person who enjoys these shows.  I will prove to you that you can learn a lot about life from these shows, and if anything, the watchers are more evolved than the non-watchers.

Last Monday was the second to last Real Housewives of Beverly Hills episode.  Other than my wedding day and the birth of my children, I am not sure if anything else could have made me happier.  Let me share with you what I have learned:

1: If you have a problem with someone, tell them directly:  Marisa Zanuck, I guess you could call her a supporting Real Housewife, as I am not sure what she is doing on the show, was trash-talking Brandi, the foul-mouthed Eddie Cibrian ex-wife, who I would enjoy a girls night out with.  Yolanda was there to hear everything and reported back to Brandi.  Yolanda is the classy gorgeous wife of music producer David Foster.  I am not a stalker, but when I go to LA I might try to steal lemons from her hundreds of lemon trees. She doesn?t put up with petty shit, and she called out Marisa in front of Brandi.  Marisa looked like an idiot and couldn?t defend herself. 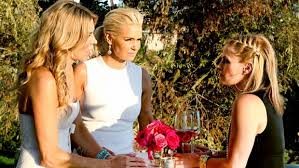 2: Don?t trash talk your husband:  These other women never forget and it will come back to haunt you.  If you want to complain about your husband, tell your closest friend who is loyal and nonjudgmental.  Let everyone else think your husband is a god.  Adrienne Maloof and her husband Paul are now divorced.  She belittled him all the time on the show, so when she acts devastated that they are now splitting up, well, there isn?t a lot of sympathy for her.

3. Jealousy is ugly: Even in Beverly Hills, where everyone seems pretty successful, these women are jealous and catty.  They show no signs of being happy for other people?s success.  The only thing jealousy reveals, is that the person herself is probably not that happy.

4.  Tell me who you go with and I?ll tell you who you are:  Kyle?s best friend Faye Resnick is a disgusting person who says unbelievably hurtful things and involves herself in situations that have nothing to do with her. (Faye’s claim to fame is that she was best friends with Nicole Brown Simpson and sold a book after her murder, and then posed for Playboy.)  I like Kyle less because of her.  If this is Kyle?s best friend, then it reflects poorly on her character. 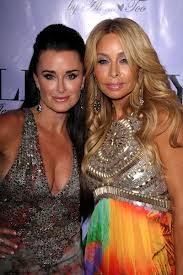 5. Aging is inevitable:  When you try to fight it too much, your face scares little children.  Listen, we can all fall victim to this.  I am scared shitless of aging.  But I hope that I don?t look scary and have taken measures for my friend to shoot me dead if I get out of control.  Moderation is key.  But these Real Housewives look like they have their dermatologists on speed dial.  They don?t look young, they look desperate. 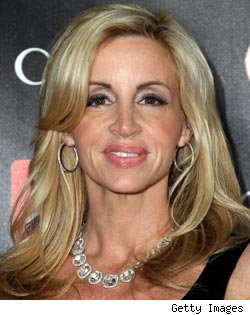 So you see, Real Housewivists.  These shows aren?t just about manufactured drama, or choreographed girls? weekends in Vegas with women you would never otherwise travel with.  There is a lot to be learned from these women.

Bravo runs show marathons all the time. And I won’t discriminate against you for watching eight straight hours of it.