An Open Letter To Andy Cohen 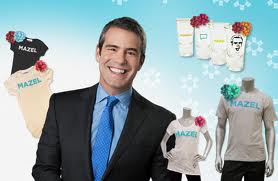 I have always liked you.  Back when I thought you were just the witty mediator at the Housewives reunions shows, I knew you had a special spark.  You were funny and entertaining.

When I found out you were a top executive responsible for programming, I added ?brilliant? to the list of adjectives I used to describe you. I imagined us as great friends hanging out and tanning together at your Hamptons house, making fun of some of the housewives, with you confessing that you have a crush on Mauricio.

You took an unknown Bravo network and filled it with the best guilty pleasure shows around.  Your talk show Watch What Happens Live is light and fun, and I even enjoy watching you openly dislike your guests.

But now, Andy, now, with the newest addition of Princesses of Long Island, I don?t think I will be able to visit you in the Hamptons anymore.

Five minutes of the premiere was all I could stomach, and the various snippets I have seen online are just as painful.  I used to live on Long Island.  My husband and his family are from there. You even filmed at a shopping center I used to frequent.  But what you have intentionally done, is cast the worst possible representation of a Long Island Jew, and for entertainment and shock value, you are giving ignorant people, anti-Semitic people, fuel for their hatred.  You are providing them with reasons to not like Jews.  To not like your people, your religion.  When a former New York City housewife was on, I actually felt the same way, but at least the focus wasn?t as much on her as a Jew, but more for the drama and cattiness, and the ugly ass apartment she created. ( I won’t name her because if I do, my readers are connected to her undergarment site)

I admire you so much for being open about your sexuality and the difficulty in coming out and being accepted.  Imagine a show that tried to make the gay community look bad?  Would you promote such a show?  That?s why it?s baffling to me that you appear to get such pleasure from making another part of you so open for ridicule.

Spiderman was given great advice by his Uncle Ben.  So I will be your Aunt Jen.  With great power comes great responsibility.  And right now you are shirking yours.

P.S. If you happen to read this, and you happen to agree with everything I am saying, and you then happen to invite me to the Hamptons, can you please tell me if you know who Joe Guidice was actually talking to on the phone in Napa? Thanks!!