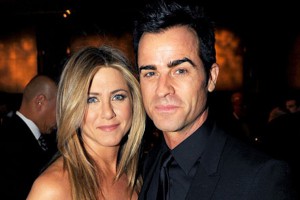 First let me just say that no one is happier than me that you are engaged.  I have struggled with you through the years.  I was cheering for you and Vince Vaughn, and I have even gone so low as to say,  ?I don?t think Brad?s kids are that cute!?  So I am really vested in this engagement and really want you and Justin to work out. I thought about getting you a great salad bowl from William Sonoma, but I felt my marital advice could serve you better.

Now I know you and I lead very different lives.  Mine might be a little more exciting with the new Chipolte that just opened and all, but my advice to you is universal.

I have thought about it a lot and I think you are better off without Brad.  He seems mean, and he gets more highlights than you, so you were doomed.  Justin is cool, funny, he did write Tropic Thunder, he has a twelve pack, and he has improved your leather jacket wardrobe immensely.

I know that children of divorce think they will repeat that in their own lives.  But look at it this way, you have done that already. You have your one divorce.  So now start with a clean slate.  Understand that at forty-three years old, this is probably your one last shot at a great relationship.  So think about easing up a bit on that career and focus on this relationship. I know feminists will be all over me, but any guy wants to at least feel like they are number one.  Don?t be so obsessed with your looks, cause it seems that you could drive a guy crazy saying stuff like, ?I feel fat? and ?do I look better with this nose??  Or, ?Do you think I should cut layers again in my hair?? Guys like confidence.  Guys are attracted to secure sexy women. Justin looks like he likes sex, and maybe a little bit of the dirty kind.  Accomodate that.  A satisfied guy is a happy guy.

So Jen, enjoy this time, but marry him sooner than later.  Approve his co-stars before he signs on to a movie. Live in New York if he wants to.  Be fun, keep things exciting.

I am telling you, this one could really stick.  I?ll buy you that salad bowl and a case of Smart Water if I am wrong.