Healthy Competition With The Hubby 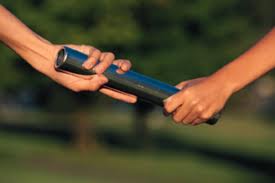 Competition often gets a bad rap.  There’s now a trend where everybody plays, everybody wins. But I find that competition can be healthy and is just part of life. As we get older though, it seems that adult competition takes on different forms.  I need to get my competitive fix where I can find it, and, I often find it with the hubby.

1. Family Competition: Scott and I enjoy sparring over who is nicer to whose family. I believe I am the winner as I say hello to his family, and Scott mumbles hello and avoids eye contact.  We also like to compete over which family we have more holidays with.  Or the most fun, which family is the most annoying.  I am not sure either of us want to win that one.

2. Nap Competition: When you are parents, a nap is like crack.  Feels so good, hard to find in the suburbs, and you will pay for it dearly.  Anytime I take a nap, Scott clocks it, and then as if I passed him a baton in a relay race, he immediately thinks he can take one, and make it longer!  He also loves to remind me of my naps. “Remember the summer of 2001? You slept for three hours on that rainy Saturday.”

3. Parenting Decision Competition: Anytime Scott and I have to deal with a parenting decision, and after we have had our “We have no idea how to deal with this” conversation, a decision will be made and one of us will claim victory. Another fun result that comes out of this competition is the “our kid is f–d up because of you” competition.

4. Other people may still find us attractive competition: As we are coming up on our seventeenth year of marriage, for some reason, Scott and I love to battle over who would get someone first if we broke up. This competition can also be referred to as “Whose eharmony inbox would be fuller?”competition.

5. Who is more fun competition?: Scott and I each try to be the most favored by our kids.  I let them curse, and Scott doesn’t force them to shower. I let them watch Family Guy, Scott lets them rent Ted. So basically, our competition is making our kids filthy derelicts.

6. Who is more affectionate competition?: This is a more recent competition.  I think I show Scott way more affection. When he says “I love you,” I always say very lovingly, “K”. When we are at the movies, I always want to hold hands, and he is repulsed by the amount of popcorn and peanut m&ms I can consume.

Oh my g-d!  Frank from Boston thinks I am cute and he likes dogs, kids, and peanut m&ms.  His profile pic isn’t too bad either.  Wait until I show Scott!  I totally win this round!