I Wish I had a Live-In Videographer 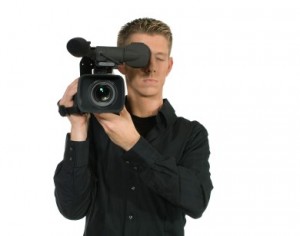 People always play those games, what would you get if you came into some money?  Me, I would hire a live-in videographer.  I would call him LIV.  I want him to follow me around and video my day to day life.  Not like Real Housewives, or worse, Jersey Shore type of taping.  I want him to be my proof.  I want to be able to turn to him at any time and say ?you saw that right??

Any mother and wife would want this.  It would go like this:

Me: ?Honey, just to let you know our plans, tomorrow I have to go to a birthday lunch, and Ben has to go to a friends, Julia has a game, and Jack is meeting friends at the park. Okay??

Scott?two hours later: ?Babe, you don?t need me tomorrow, we don?t have anything going on, right??

I stare at LIV, like those characters do on The Office and Modern Family.

When Scott and I have an argument about how we are speaking to one another, now it?s easy to determine who is wrong.

Even better, when my kids are fighting, and I know they are lying about what happened, I can now get all LA Law on them.

?I object? and ?I?d like to submit this video into evidence.?  I knew my law degree wouldn?t go to waste.

Then I could make a confessional room, and I could go in with LIV and just talk to him.  Give him my point on the day of events.  It would be like therapy, except better because I can say everything I want and no one would tell me I might be wrong.

?You think that math is easy, right? ” Don?t you think they should know this stuff??

I totally know what I am asking Scott for this year?s birthday present.