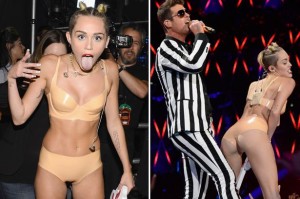 You ever feel like you are the only one seeing something wrong?  That you must be crazy because no one else sees it? Well, this week that’s how I feel about the Miley situation.  As you know, since the VMAs there has been outrage on every news channel.  Discussion panels, radio shows, entertainment pages, all dedicated to Miley’s performance and what it represents for our society, and its impact on our young children.

I saw it.  She twerked, she gave Robin Thicke an unintentional on-stage boner, and she ruined foam fingers for everyone. Even my dogs.  They won’t even chew them up anymore, and now they hide them under the couch and look up at me as if to say, “I am not touching that, do you know where that’s been?” In an attempt to maintain an MTV tradition of raciness and necessary next day office talk, she went a little too far.  And even though she won’t admit it, she probably had a moment the next morning like many of us women have had, where we review our night before, hands over our face, and say to ourselves, “Did I really do that?”

So really, she embarrassed herself more than hurt anyone else, right?

Compare that to Simon Cowell.  In recent weeks, we learned he has been having an ongoing affair with a close friend’s wife, and now said wife is pregnant with his child.  Simon’s “good friends” have now divorced and she is now with Simon in St. Tropez.  Everyone is talking about how great it is that he will be a father, and there have been pictures of him smiling on his yacht, and kissing friend’s ex-wife.  No commentary about how kids look up to him and love him, and “what kind of example is this for our young adults?”  No mention of his lack of moral character or loyalty to others.

But my favorite is Charlie Sheen.  A well documented drug addict, drunk, woman beater, deadbeat father whose ex-wife Denise Richards has custody of his kids from another marriage.  His Christmas card list only includes women who stick mistletoe where the sun doesn’t shine, yet everywhere he goes he is met with applause and praise.  He is still offered television shows and Fiat commercials.  He can say the most disgusting things about other people, spew aggressive violent threats against women, yet he is somehow absolved of any wrongdoing.

So Miley, who has followed in the footsteps of Madonna in a wedding gown dry humping the VMA stage, Lil Kim, who wore a sequin to cover her nipple, and Britney, who went full tongue with Madonna, has managed to receive the wrath of the media and society as a whole? 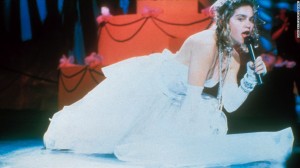 Please help me understand.  Is it her lack of a penis?  Is it that we all once saw her as an innocent star and now we feel she betrayed us? 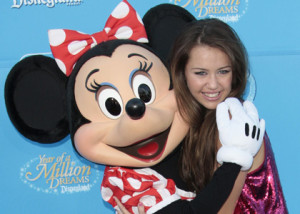 All you have to do is tell Miley to tone down her moves a little and brush her tongue regularly.  The conversations with Simon and Charlie would be a little more involved, don’t ya think?