The Lohan Of Parenting 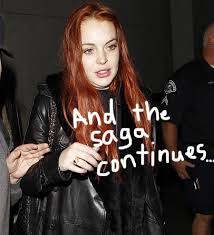 You are the Lindsay Lohan of parenting, I tell my friend.

What do you mean?

Well, you always say you are going to take care of the problem, but you never do. You do things to put yourself in a bad predicament, and then you complain that you are in the same place you were before. You?ve even sought professional help and don?t listen. You may as well take up Cocaine like her too.

Everyone has a friend who will talk to her about their kid problems. Then you give her advice, and they say, ?you?re right, I know you?re right, I?m going to do something.? Then a few months later they are complaining about the same thing.

Well, I have one friend, and it?s been about a decade.  The kid?s problem is not even that big. He just has assholitis like so many others out there.  You know the symptoms, unappreciative, given chores he completely ignores, moody, but all of a sudden becomes loving and happy when he gets what he wants? For More, check Web MD.

I understand her problem. I have her problem. When I first had kids, I thought we would have a Yearly Family Yearbook and I was going to be voted Most Popular.

I never wanted to piss my kids off. Just wanted them to like me.  Never disciplined. Till I realized there was never time for a Yearbook committee meeting, and Most Popular would definitely go to our dog who can lick himself for twenty hours out of the day.  And Most Selfish would go to my kids.

I pose to my friend. ?What is the big deal if there are consequences for your son if he refuses to do his chore of picking up the poop in the backyard?  Are you worried he will hate you?

?Not sure, maybe.? she admitted. ?But we are changing,? she triumphantly declared.  ?The hubby and I have decided to put our foot down. Each time he doesn?t pick up poop, we won?t let him bid on sneakers he wants on Release day.?

I think I stopped breathing for a second.  (Like a paddles on the chest, ?Clear!!? moment) “What?” I barely managed to get out. “You think you are disciplining him by not letting him get ridiculously priced sneakers on the first day of their release, a day we are not sure of the exact date?”  Would it go something like, ?Kid, you are in so much trouble in three months from now when the new Kobe?s come out, you will feel our wrath!?

I plead, ?Please don?t tell anyone else this. Please. And I promise I will keep this to myself, like the time you accidentally peed in your pants.?

Seriously, I advise. If he doesn?t clean up the crap, you stop cleaning up his. Or you take away his phone.  Or you wear crazy short jean shorts in front of him and his friends, and say stuff like, ?Honey, your underwear had a ton of stains in them yesterday.?

I try play devil?s advocate. ?If we don?t teach our kids that the world doesn?t revolve around them, how would they know differently?  When you do nothing when he ignores his chores, it?s really your fault you are dealing with the dog crap and the kid crap. Lots of crap.?

So I figure there are at least a few years when our kids want little to do with us and aren?t very crazy about us.  And we might not like them that much, either. A parent shouldn?t worry too much about their relationship with their kid if they punish them, worry more if they don’t. If there are no consequences for them when they are being bratty selfish children, then they grow up to be bratty selfish adults, then bratty selfish husbands or wives. They won?t call to check up on you, they will marry horrible human beings who will only want to spend holidays with their families, and they will try to put you in a nursing home at 55 so you won’t be a bother.

And those, my friend, will be the consequences of your bad parenting behavior. So shape up. Make some changes Lohan.

I love you and you are a great mom, but I really want to start talking about other stuff, and stop stepping in poop at your house.  Maybe I?m a little selfish. Blame my parents.